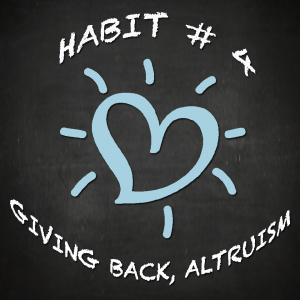 Continuing on with the seven part series regarding happiness, this week we’re digging deeper on habit four: Altruism.

Doing good things is an essential ingredient to happiness. How we spend our time and our resources is more important then the amount of money we make. Giving to others releases endorphins and activates the part of our brain that is associated with trust, pleasure, and social connection.

So what is Altruism?

It is when we act to promote someone else’s welfare, even at a risk or cost to ourselves. It involves the unselfish concern for other people simply out of a desire to help, and not because of obligation, duty, loyalty, or religious reasons. Studies have found that a person’s first impulse is to cooperate rather than compete. This hardwired ability helped our ancestors to cooperate and survive under harsh conditions.

In the Boston marathon bombings, some of the people in the crowd intuitively rushed towards recently exploded bombs. These were not people trained in being first responders, they rushed to a stranger’s aide because they knew help was needed – period. They put their own well being on hold so that they could help another who was in need. That was not only an extreme example of altruism, it was an act of selfless bravery!

“Altruism is one of the most fundamentally social impulses. Doing things for others without expecting anything in return is core to what makes us human.” – Joe Green

When we make the effort to give without expected reciprocity, we feel fulfilled and energized. Practicing altruism enhances our well-being emotionally, physically, romantically, and even financially; and it is crucial to having healthy communities.

Here’s what researchers found regarding altruism:

“Altruism is innate, but it’s not instinctual. Everybody’s wired for it, but a switch has to be flipped.” David Rakoff

There are many ways to introduce or enhance a consistent habit of altruism that isn’t practiced only around the holiday season. Altruism can be simple things such as performing random acts of kindness or more extensive commitments of your time, health (blood/organ donation), or money.

For me I am a huge fan of performing random acts of kindness such as putting a neighbors news paper on their front porch as I walk home after a run, refilling the coffee supplies for my co-workers (even though I don’t drink coffee at work), to putting shopping carts left in the parking by others in the shopping cart corral. I’m also a financial supporter of American Cancer Society and American Heart Association. But after writing this post I can see that I can and should do so much more such as volunteer some of my time. Note to self: Do that will you? 🙂

How will you start or enhance your altruism habit?